Reading scientific papers is, too often, the visual equivalent of nails on a chalkboard.  One problem I see over and over again is poor color use, because scientists don’t seem to know anything about color theory.  The example figure below is particularly bad.  Here are the principles I used to revise it: 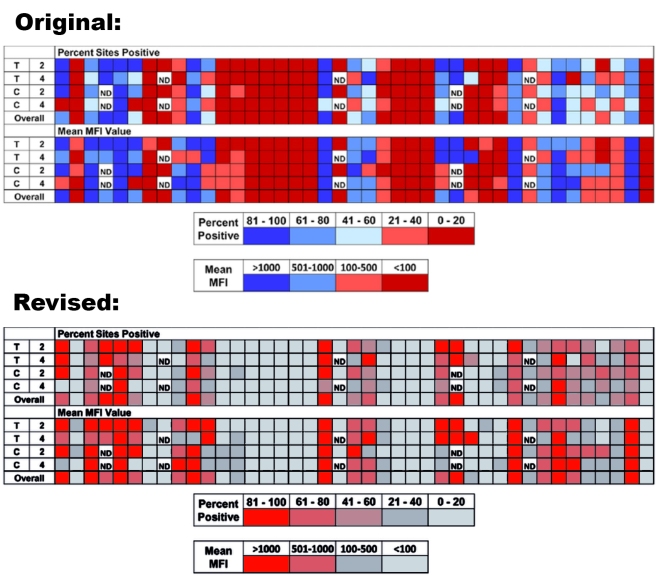 First, colors have meaning.  Blue means cold and red means hot, but I often see figures like the above that use blue to mean a high value and red to mean a low value.  This makes your figure harder to understand because it works against the natural assumptions a person is trying to apply.

Second, things with high contrast stand out.  In the example figure, most of the squares are dark, saturated red or dark, saturated blue.  A few contrasting spots stand out: the white “ND” squares and the very light blue ones.  Are these the most important things in the figure?  Probably not – ND stand for not detected, a void in the data, and the pale blue is for middle values, not the highest or lowest.  This misused contrast distracts the viewer from the main point of the figure and draws their eye to unimportant information.

Third, I often notice that scientists almost always use uniform saturation for their colors.  Adding grey and reserving really bright colors for important elements of a figure can both make the meaning of the figure more clear and make the figure easier to look at.  A ton of screaming bright colors can be a real headache.

Finally, it is important to make sure that your figure is legible without color.  One, this is an accessibility issue: some scientists are color blind.  Two, your paper may be printed in black and white.  The bad example above is almost completely impossible to read when the color is removed because the red and the blue are such similar shades of grey.

In my revision, I switched the colors so that a hot red meant high values, and then used a cool grey for low values.  I used a bright, saturated red so the highest values stand out the most, and made the lower values paler and grayer so they wouldn’t compete.  In black and white, the high values are the darkest and the low values are the lightest so the patterns in the data are still easy to see.

I think my revised figure is much nicer to look at, and all I did was change the color key.  Color theory: you need it, fuckers!

View all posts by ajlucy