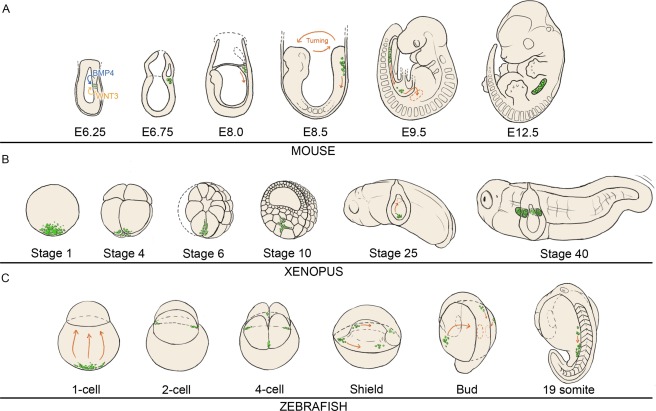 Above: my hand-drawn illustration of mouse, frog and fish embryos growing.  Green: starting materials for eggs and sperm.

Earlier this year I spent a few months writing up the background of my thesis work for a chapter in The Immortal Germline.  While it’s directed toward is mainly scientists who are already in my field (or are graduate students interested in entering it), I want to share the final product!  It’s available online here, free for the rest of this month: Chapter One – The vertebrate Balbiani body, germ plasm, and oocyte polarity.

(Thanks to Ruth Lehmann for editing this volume and giving me the chance to write for it!)

I’ve spent uncountable hours, now, fascinated by eggs (oocytes, in scientific parlance).  They’re life’s beginning.  Sperm swims up and says, “hey, here’s some genetic variation for the good of the species” and doesn’t contribute much else.

The egg has all the good life-goop.  It splits in half, then half again, and it doesn’t grow until that’s gone on for many doublings.  The egg made all of that; all it’s doing is getting divvied up. 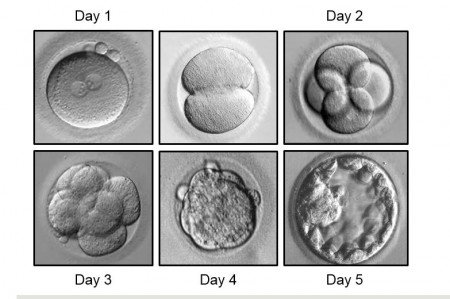 Not only that, but the life-goop is organized.  It’s not like chopping up a potato where you get eight largely identical beige chunks.  More like red cabbage: Some parts have more stem, some parts more purple leaves.  The growing critter takes that initial distinction between cabbage-wedge 1 and cabbage-wedge 2 and spins it out, fractal-like, into the information needed to make a whole animal.

My thesis is about the way that organization gets going.  I want to know how eggs go from a ziplock bag full of nutritious life-soup to a ziplock bag full of life-soup with all the carrots on the left side and all the dumplings on the top right.  It’s a tricky problem, but life is incredibly good at solving it.  Someday, we’ll know how. 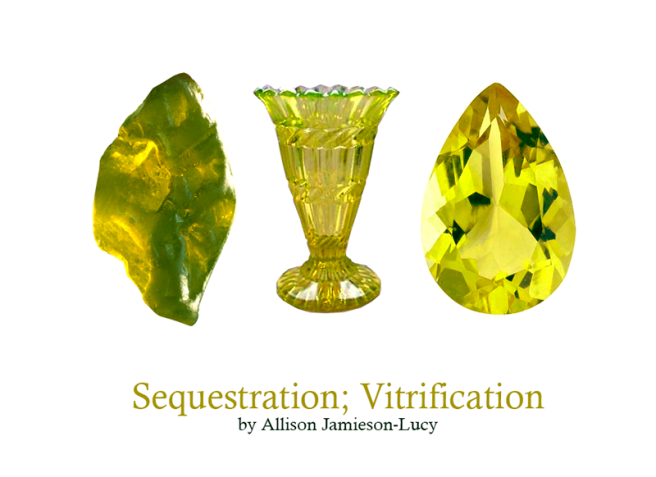 I have new fiction up at Strange Horizons as of Dec. 17, 2018!  A genetic engineer struggles to modify diatoms to entrap radioactive waste, under the shadow of nuclear proliferation.  It’s about burnout, queer activist community, modern art, and glass.

It’s been long-listed for a BSFA award, and I’m grateful to be listed along many authors I admire.  I also appreciate the lovely, thoughtful reviews I’ve received here, here and here.

DNA is not like blueprints.  Blueprints need an architect to draw them up, and a construction crew to turn the plans into buildings.  Biology is too self-contained for contractors.

A painting isn’t of a saint until a mind looks at it and sees a halo.  Before that it’s paint spread on cloth.

In the 1950s, abstract expressionist painters were consumed by the fact that a painting is an object and an action. Frank Stella puts a black stripe on a canvas, and it’s not a picture of a lamppost, or a snake, or a shadow; it’s a picture of radiator paint on cloth, because it is radiator paint on cloth.  Richard Serra throws molten lead against the baseboards: a sculpture of throwing.

The art is the object, rather than the representation.

DNA is like abstract expressionism.  The object is the data.  A molecular machine slides down DNA, like fingers sliding across a knotted rope, and bumps the chain push and pull on microscopic levers to make living things.  Physical.  Mindless.  Analog.

DNA is stupid the way a music box is stupid.  A music box doesn’t know the song it plays, it’s just made that way.

When the crank turns (1) the pegs hit the key (2), and that’s one note.  Then, as the crank turns again, the next peg (3) hits another key, and that’s another note.  Enough turns make a song.  That’s what the song is, to the music box — an object and an action — the drum and the crank.

The same way, DNA’s physical shape creates life.  Each peg of the DNA places a molecule in a thread, (instead of notes, amino acids), and the molecular chain lengthens into a chemical song that doesn’t need a musician, a composers, or an architect.

First, take 5-7 cloves of garlic and crush them with the flat of a knife.  Remove the peel and stem end.  Combine with a quarter cup of olive oil and heat until the garlic is just browning, releasing its essential oils into the mixture.

Put the garlic aside with a lid over it, to sweat out sulfur-containing compounds that can cause irritation.

Now you will need to boil some water and put a generous amount of sea salt into it.  Place half a pound of spaghetti pasta into the water and cook to release the starch.  You will need the starch to hold the balm together.

Once the garlic is soft, put the garlic back on the heat and add oil cracked pepper, red chili flakes, and two thirds of a cup of pasta water.  A few tablespoons of butter will make your lip treatment more creamy and luscious.  Stir mixture until the oil and water emulsify.

Since you have the cooked spaghetti already, and since this is not actually a lip treatment, it’s an Italian pasta classic, why not put that pasta into your garlic and olive oil and butter and stir until all the pasta is coated with sauce.

Add some grated parmesan, which will pull the sauce together and everything melts together into a wonderful dish.

Put it in a bowl, add a little more cracked pepper and cheese to the top, and enjoy this simple and elegant meal.

As an added benefit, the rich sauce will glide over your lips and make them super soft.  Plus, having your lips lightly coated with fat will make you feel like a fifteenth century noble who has just feasted on duck and goose and is resplendent with decadence and wealth.

The crap in the news has spent 2017 trying, tirelessly, to steal my joy.  I have dug in my heels and done my best to not let it.  This year I got married and finished the first draft of a book and went to a lot of protests.

I have two award-eligible stories this year:

I am also eligible for the Campbell Award!  (My 2011 publication in Daily Science Fiction was before the market was SFWA qualifying.)

If you think of me when nominating and putting together 2017 lists, I would appreciate it!

Today I learned that you can buy miniature sweet corn that only grows 3 feet tall and can be grown in a pot!

You can buy it here. 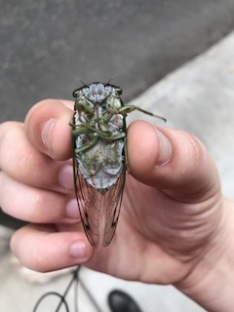 Some things are wonderful — harassing bugs I find on the sidewalk, taking photographs of weeds by the road, making glossy bread and all-from-scratch dinners, brightly colored vegetables.

(Angry catfish grunt like little pigs and it makes me happy.)

I patched all the holes the cats made in our wingback chair with luxury upholstery fabric we got on the cheap from a woman on etsy who sells books of discarded fabric samples.  Our floor is glittery from extra bits of imitation gold leaf that got everywhere during my last minute wedding DIY projects.  I cleaned under the couch and fished out all the cat toys that had vanished in the past month, so the foster kitten is overjoyed with new catnip smells.

On the end table beside me is a stack of books and magazines: Vogue beneath Anne Boyer beneath Ursula Le Guin.

These are all small things, but they are good, and I am grateful for them.

Today I learned that people who breed tarantulas for fun call the babies “slings.” (FYI there are spiders at the link.) 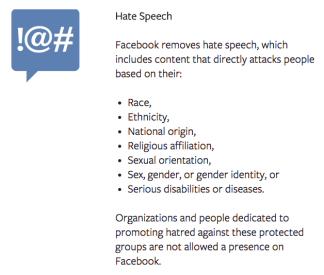 These folks were on our campus today, being foul and hateful.  While I was out counterprotesting they called me a cuntsucker and a vaglicker.  They screamed at a women in scrubs asking if she was a baby killer.  They said gay people are pedophiles and rapists.  One of them mentioned that they have 300,000 followers on Facebook.  It would be cool if that wasn’t true, but it is!

They are explicitly in violation of Facebook’s community guidelines.  Here’s their page: https://www.facebook.com/ChristianInterviews/

If everyone reports them for being dedicated to promoting hatred, maybe we can get their page taken down and deny them a platform to keep spreading hate and sharing videos of their protests.

Today I gave a lady at a food truck five dollars in exchange for the most gigantic fruit salad I’ve ever seen.  After that I got a tattoo and then I had some fried Taiwanese sausages and a beer.

It’s deer molars and a quote from Margaret Atwood.  Activism is a long fucking grind — it means being inconvenienced and uncomfortable over and over again in pursuit of incremental gains.  After the 2016 election I wanted something permanent to touch down on when I feel burnt out.

I read The Handmaid’s Tale when I was about twelve.  Most of it went over my head and the rest of it scared the shit out of me.  It’s an intense book when you’re in middle school.  I remembered two things very vividly: one, Atwood describes a penis becoming aroused as a snail coming out if its shell which was possibly the first detailed description of male genitalia I’d ever encountered, and two, Offred finding don’t let the bastards grind you down scratched into the floor of her room in schoolboy latin.

The former I would rather not immortalize, but it seemed apt to put the latter on my skin.